2021 results of the main European retail banks confirm a prevailing trend in the sector: French banks are not performing as well as their European counterparts (see figure 1). Despite a 2% improvement in their average cost-to-income ratio (CIR down to 68%, as compared to 2019), French banks are lagging behind the leading European banks (average CIR: 50%). The gap widened slightly this year, despite a 3% increase in French banks’ NBI. This gap is due to rising costs: although European banks costs’ have decreased by 2% between 2019 and 2021, French banks’ costs have increased by 1%. 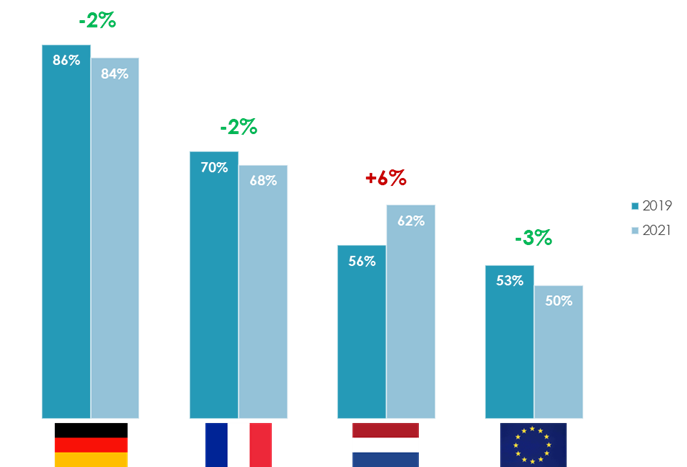 Source: Annual reports of a panel of European banks1

Retail banks must reduce their costs to improve their performance

The French retail banking model must therefore innovate to improve its profitability. Below are several notable areas for improvement:

Although short-term requirements are compelling French banks to reduce their costs, French banks must continue to invest massively in their transformation so as not to lag behind neobanks. While maintaining their strengths (local service, business expertise, existing territorial network), banks must also improve their services: better segmentation and personalization, marketing of ESG products, data exploitation, etc. The retail banking industry must undergo radical change whereby scarce resources (equity and employees) and abundant resources (data, technology) are deployed in a short time span. Prospective projects are many and should account for short-term profitability and cost reduction requirements.

SG / Crédit du Nord merger: the creation of a "giant bank" to generate a performance shock

Despite an NBI of €7.8 billion in 2021, ranking it as the 3rd largest French retail bank, Société Générale Group’s structural costs remain high. This leads to a lower profitability, with a CIR higher than that of the national average (72% in 2021 vs. 68% in France).

Société Générale has therefore adopted a "shock" strategy by significantly overhauling its model.  The group will use Crédit du Nord’s "regional SME banking” model, with local branches located within a 2-hour drive from the headquarters. This will help in creating a giant bank with 10 million individual customers in a "1 bank, 1 network, 1 headquarters, 1 IS" approach. The merger is accompanied by a major streamlining of the two entities; duplicates will be reduced (physical branches, back-office, cross-functional functions, IT, etc.) and specialization will be reinforced. The streamlining objectives are very ambitious, with more than 10% and 40% reductions in the number of employees, and branches and back offices, respectively. At this stage, Boursorama will not be affected by the operation.

This merger will be characterized by an unprecedented branding strategy that will give rise to a new national brand associated with certain regional brands from Crédit du Nord (Marseillaise de Crédit, Laydernier, Courtois). With this proactive strategy, Société Générale hopes to reduce its costs by EUR 450 million by 2025.